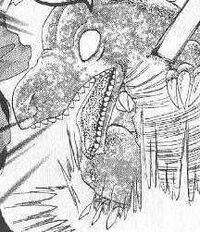 The Bagu are the main antagonists in the one-shot manga series Tokyo Black Cat Girl, and their plan was to invade Earth. They are parasitic aliens who are dangerous in large numbers, but weak by themselves. They are always multiplying, and they can suck people's blood. The leader of the bagus is intelligent, and can speak. The Bagus are large and resemble dinosaurs.

Masha met Hime Azumi, the main protagonist of the series, and told her she had to protect the world from them. The Bagu's leader attacked her future boyfriend, Noda, but Hime transformed and managed to save his life. All of the bagu's victims survived, and the bagus themselves were defeated.

Retrieved from "https://tokyomewmewpower.fandom.com/wiki/Bagu?oldid=13096"
Community content is available under CC-BY-SA unless otherwise noted.