Ichigo Momomiya is a character from the manga and anime series Tokyo Mew Mew, and the main protagonist and heroine of the story. She is the first of the Mew Mews to be introduced and her D.N.A is merged with an Iriomote cat.

Ichigo is first introduced when she is on a date with her love interest, Masaya Aoyama. She is attending a Red Data Animal exhibit with him (Although she believes that he is oblivious to her feelings, he later returns them and they begin dating). She meets the future Mew Mews at the exhibit. (Manga only) In the anime, Masaya and Ichigo go to the park after going to the exhibit. Suddenly, there is an earthquake and then Ichigo is injected with the D.N.A of an Iriomote cat in order to save her life. Later on, she begins having cat-like aspects, such as eating a lot of fish, being more acrobatic (as in she can land on her feet like a cat does), and sleeping more than average. During the date, she passes out when she is injected and has a dream of a cat going inside her or merging with her. When she wakes up, Masaya says she has been sleeping for hours. A bit later Masaya is then attacked by a Chimera Anima and Ryou Shirogane gives her a Mew Pendant and encourages her to transform into Mew Ichigo.

Midway through the series, Ichigo gains a mysterious protector – the Blue Knight who later turns out to be Masaya. Throughout the series, Ichigo repeatedly rejects repeated advances by Quiche, one of her enemies, but, even though she could not accept his final declaration of love, she cried and held him when he died, showing how kind Ichigo is.

Ichigo dies while transferring her own life force into Masaya after Masaya sacrifices himself to kill Deep Blue, another one of her enemies, but is subsequently revived by the Mew Aqua in Masaya. Later on, Masaya decides to go to study aboard in England at the end of the series; but before he goes, Ichigo participates in a mock wedding with Masaya (manga only).

Tokyo Mew Mew a La Mode reveals that Ichigo lost all of her Mew Powers and joined Masaya in England, but returned to Japan when her powers began to manifest again to aid in the battle against the Saint Rose Crusaders with her new teammate Berry Shirayuki.

Ichigo is sweet, and ready for anything. Sometimes she will go crazy if she is mad or excited. She is head-over-heels in love with Masaya. Ichigo cares very much about her friends, and cannot bear to see someone hurt. However, she's also got a very bold nature and is very friendly. She's also very hard working, and very brave (the only thing that scares her is ghosts). She's a very good leader of Tokyo Mew Mew. Her hobbies are buying clothes, and spending time with Masaya Aoyama. Her favourite food is waffles with maple syrup, pizza, fish, dried bonito and strawberries. She dislikes carrots. She is hyper and a happy, cheery person. Her friends Moe and Miwa support her relationship with Masaya. She acts quite preppy in Mew Mew Power.

Ichigo has cherry red hair. She normally has it in pigtails tied up in red ribbons. She wears a red ribbon with a bell on it around her neck (given to her by Masaya), and is usually found wearing her school uniform. When not, she is often seen wearing a yellow shirt and red shorts.

She wears a red dress with a white, heart-shaped apron and pink and white ribbons. She also wears pink socks and laces with black shoes. Instead of pigtails, Ichigo's hair is clipped with a lace headband and let down.

When Ichigo is transformed, her hair and eyes turn bubblegum pink and she grows black cat ears and a tail. Her tail has a magenta ribbon tied around it with a bell. Her hair is let down and is curlier than her civilian form's. She wears a short carnation pink dress with matching arm garters and a leg garter on her right thigh, along with a choker around her neck. Her gloves are dark pink and reach to her wrists. Her boots are magenta with black laces and end just below her knees. She has dark pink lace lining the top of her dress and the top and bottom of her arm garters, leg garter, and her choker. Her choker has her Mew Pendant dangling from it.

Her Mew Mark is a pink version of the imprint on her Mew Pendant on the inside of her right thigh.

She is full of energy, agile and enduring even in her civil form. In one episode, Ichigo joins the rhythmic gymnastics team at her school where she improved her stamina, agility, flexibility and reflexes. Sometimes her enhanced Mew Mew abilities (jumping high, landing on her feet) manifests in normal form, without her controlling it. She has some hand-to-hand skill that is combined with her abrobatic skills giving a combat advantage. She knows how to swim.

As a Mew Mew

Ichigo is the leader of the Mew Mews. Ryou Shirogane, a wealthy, 15-year-old boy, gave Ichigo her Mew Pendant so she could transform into Mew Ichigo. Later on in Tokyo Mew Mew, Ichigo meets a grey cat called Alto, who was actually Ryou as a cat, who first finds Ichigo's lost choker. Her D.N.A is infused with the Iriomote cat. Her transformation phrase is "Mew Mew Strawberry... Metamorphose!", and she transforms into Mew Ichigo. At first, Ichigo constantly frets that Masaya would not return her feelings due to her powers, but when he did find out, he didn't mind. She first transforms when Ryou pushes her out of a tree. Ichigo's powers are love-based and emotion-fueled. She transforms partially (cat ears and tail appearing) when she is excited or embarrassed.

If she is very excited or embarrassed she turns into a small black cat and must kiss another animal or human in order to return to normal.

With the D.N.A of an Iriomote cat, Ichigo is granted certain cat-like abilities. One is being able to land easily after falling from a great distance. Another is being able to predict the weather.

Ichigo's transformation, as expected, is the most elaborate sequence out of the five team members. It begins with her Mew Pendant glowing with a burst of rainbow light. The next scene shows Ichigo in a curled up position, surrounded by the power of the Mew pendant with her DNA morphing in the background. She then throws her arms upward and twirls around in a burst of sparkles and her Mew uniform appears on her body in a swirl of pink energy. Her tail pops out and her gloves dissolve onto her hands. Finally, her ears sprout from her head and she concludes the transformation by gracefully lifting her leg and sending a stream of sparkles from her hand, which spirals around and dissolves into her choker and Mew Pendant. She then strikes her signature pose. 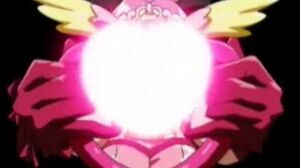 Mew Ichigo's weapons are the Mew Aqua Rod and the StrawBell Bell. It is first seen in chapter 1 of the manga and episode 1 of the anime. In episode 15 of the anime, Ichigo's weapon gets joined up with the Mew Berry Rod to make an Upgraded Version of the StrawBell Bell. In chapter 8 of the manga, the weapon is given the ultimate upgrade and named StrawBell Bell Version Up, because the Mew Mew's weapons join up with hers, excluding the Mew Berry Rod.

Another attack used by Ichigo is "Ribbon Aqua Drops", in which she summons the power of the Mew Aqua Rod and in a swirl of light, she rises in the air and spreads blue, bubbly energy across the surface of the Earth.

In A La Mode, Ichigo is able to perform a joint attack with Berry named "Ribbon Doubleberry Check!"

For the English translations of the manga, Ichigo's name is the same as the original Japanese version.

Tokyo Mew Mew was dubbed and localized in many different languages. The names of the characters were also subject to change. Many of the dubs that didn't use Ichigo or Zoey often translated their words for "Strawberry" as her first name; for example: Chau-Mui and Morango all mean 'Strawberry' in their respective language.

Retrieved from "https://tokyomewmewpower.fandom.com/wiki/Ichigo_Momomiya?oldid=18287"
Community content is available under CC-BY-SA unless otherwise noted.