Tom Wayland
Masha is the first robot created by Ryou Shirogane and Keiichiro Akasaka, with Ucha being the second.

After the aliens are defeated at the end of the first series, Masha chooses to stay with his owner Ichigo Momomiya when she goes to London with her boyfriend Masaya Aoyama. With Masha's absence, this could be why Ucha was created and Masha was not given to Berry Shirayuki, the protagonist of the second series.

Masha has a round, furry, pink body. He is small enough for people to hold him in one hand. He has pink cat ears and large pink eyes. He always appears to be blushing, like Ucha. Masha looks the same as the Masha from Tokyo Black Cat Girl. He is very protective of Ichigo and tries to help in battles, but often fails to do so.

Masha can sense when someone is in trouble and, like Ucha, detect Chimera Animals and Mew Aqua. He also is able to "collect" defeated Chimera Animals by eating the jelly-filled enemies so they do not attack anyone or anything again. While he does this, he exclaims "Collect!". He can also merge with Mew Aqua found by the Mew Mews to transform into the Mew Aqua Rod, allowing any of the Mew Mews to perform the Ribbon Aqua Drops healing attack.

In the Tokyo Mew Mew anime adaptation, Masha has a more extensive vocabulary, and tries, unsuccessfully, to assist the Mew Mews in some battles. Primarily communicating by repeating the sounds "pi" and "tweet", Masha does not appear to be designed to support high-level speech initially, though in Tokyo Mew Mew a la Mode he is once shown speaking in a complete sentence.

Most dubs either use the original Japanese name or the 4Kids English name. However, there are a few dubs that come up with original names. 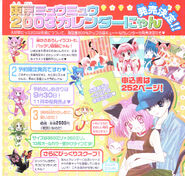 Retrieved from "https://tokyomewmewpower.fandom.com/wiki/Masha_(Tokyo_Mew_Mew)?oldid=17197"
Community content is available under CC-BY-SA unless otherwise noted.