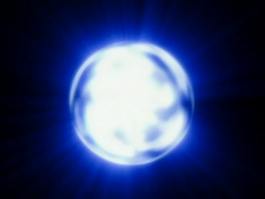 Mew Aqua (Blue Aqua in the Mew Mew Power dubs) is crystalline water with a high level of purity. It has various types of powers which include healing injuries and cleaning the environment. The extent of its powers and the origin of the Mew Aqua is explained more in the anime than the manga.

The first time the Mew Aqua's powers are seen is in episode 13 when Ichigo activates it by grabbing Masaya's hand, it causes her to glow blue and gives her a boost of power to get rid of Quiche's Chimera Anima.

The first physical appearance of the Mew Aqua takes place in episode 19 when it causes Mew Lettuce to turn into a mermaid, allowing her to save two children from drowning and helping weaken the Chimeras. It's not until episode 21 that the Mew Aqua and its powers are explained to the Mew Mews and that the small bit that caused Mew Lettuce's transformation was only a small fraction of a larger piece and that their mission is to find the larger pieces. After a few false alarms, one of the larger pieces is found in episode 26 and is used by Mew Ichigo to get rid of the Chimera Moth. Quiche uses this opportunity to send some of the Mew Aqua into the alien dimension, explaining that it'll give Deep Blue the power to fully awaken. They then try to take the Mew Aqua Rod in episode 27 in hopes of giving more to Deep Blue but it turns out to no longer have any Mew Aqua left.

The next big piece isn't found until episodes 37-38 but the aliens use their powers to make the Mew Aqua into an explosive. In the attempt to stop the explosion, the Mew Mews cause the Mew Aqua to burst into smaller pieces and it scatters throughout Tokyo, one of them injuring Masaya. While Ichigo tends to him, the other Mew Mews collect some of the pieces while the others pour into the alien dimension, giving Deep Blue more strength.

Sometime later, in episodes 42-43, there is another Mew Aqua detected. Zakuro is the first to find out where it is but refuses to tell the aliens and also refuses to fight alongside the Mew Mews. It turns out that it is being carried by a flock of birds and they ask Mint to use it to help save their kind. Minto, who is suffering from the thought of Zakuro betraying the team, refuses so the birds decide to hide it. After a fight between Minto and Zakuro, Pie and Tart appear and use a tornado to suck the birds in and find the Mew Aqua. Minto, overcome with emotion, manages to activate the Mew Aqua, allowing Ichigo to use it to get rid of the tornado and clean up the Earth.

In episode 44, Ryou and Keiichiro find out a startling twist on the Mew Aqua. It turns out that it was created by the Aliens in the first place. Before they left Earth millions of years before, they created the Mew Aqua for some unknown reason and say that even the bigger pieces they have found so far are still remnants of one large piece, which they call the final True Mew Aqua. Retasu suspects that the aliens knew that someone like humans would try to inhabit the Earth and unintentionally destroy it, so they made the Mew Aqua for the Earth's protection. They later come along what appears to be the final True Mew Aqua piece but it turns out to be a fake.

In episode 46, after Masaya joins the team, they find out that something is causing the Sumida River to glow. After investigating, they find out that the water is clean, thus suspecting that it was caused by a Mew Aqua. Although, Masaya suspects that it's something more and it is hinted that the power is coming from Deep Blue. After finding nothing in the river, it leaves them with more questions than answers.

In episode 48, Ryou and Keiichiro find a Mew Aqua signal in a mountain but it turns out to be a false signal created by Quiche to test the Blue Knight's powers.

In episode 49, Deep Blue takes over the body he created, which was Masaya, and manages to attract the Mew Aqua from all over the city, causing him to be fully awakened.

In episode 50, when the Mew Mews tell Ryou that they no longer have the energy to transform, Ryou gives them the last piece of his Mew Aqua necklace to give them a power boost to help them transform again.

In episode 51, after Deep Blue goes into a floating alien base, Keiichiro informs the Mew Mews that the final True Mew Aqua is inside the base. As Ichigo goes inside, Deep Blue has already figured that that speculation isn't true and proceeds to damage the base while trying to destroy Ichigo.

Finally in episode 52, Masaya takes back control of his body and finds out that he was the final True Mew Aqua the whole time (thus finally explaining how Ichigo came into contact with it in episode 13) and decides to use it to save everyone that he's killed and fix the damage he caused. When Deep Blue attempts to regain control, Masaya manages to separate himself and restrains him, telling Ichigo to attack. After some convincing, Ichigo finally attacks, causing Masaya to release the Mew Aqua inside of him at the cost of his life. Ichigo then uses up her powers to bring him back and he ends up using more Mew Aqua to bring her back as well

More of the Mew Aqua's power is shown in the PlayStation game. Using it along with the DNA of her pet penguin, Yuki, Ringo is given the ability to transform into a Mew Mew. Since her transformation is powered by Mew Aqua, her attacks mostly have the power to heal the other Mew Mews. The Mew Aqua in Ringo's pendant also gives Ichigo a transformation upgrade.

Very few dubs keep the original name, most either translate the English dubbed name or come up with their own. In the Italian and English dubs, they give separate names for the smaller and larger pieces of Mew Aqua.

Add a photo to this gallery
Retrieved from "https://tokyomewmewpower.fandom.com/wiki/Mew_Aqua?oldid=18163"
Community content is available under CC-BY-SA unless otherwise noted.