Andrew Rannells
Quiche is a character who appears in both the anime and manga series. He is one of the alien antagonists who come to Earth, wishing to "reclaim it."

Quiche's unnamed alien race (called Cyniclons in Mew Mew Power) are distant relative of humans, since they are both originally from Earth. It's quite possible that his race is an earlier form of human kind, so he has the normal characteristics as his people that are similar to humans.

His most notable characteristic is his golden eyes with orange hues with small slits that stick out more than anything due to their brightness. He has large, pointed elf-like ears that all people of his species have, which are quite noticeable. He has two small fangs and is very pale due to living underground all his life. His dark green hair is styled rather short in the back, but he keeps the hair in front of his ears styled with red bands that some aliens use with their hair.

Quiche seems to have the body size of a human male around 13 years old that is notably skinny. He dresses in clothes obviously native to his race. He wears a dark green shirt with poofy sleeves and high collar with red stitching and a brown shirt over top. The shirt only goes halfway down his chest and shows his midriff.

It appears that a brown V-neck shirt is stitched onto the black shirt, and, as it is seen when the inside of his shirt is showing, it is quite possible that the black shirt only goes down to the length that is shown from the brown shirt's V-neck. Quiche wears black baggy pants that end at mid-thigh held up by a red waist band and red bands around his mid-thighs. He wears a brown loincloth that covers the front and back of his body that is held there by the red waistband. On the back of his pants are two long and skinny cloths that flow around in the air.

Quiche has a goal, of course. But it has changed in Mew Mew Power, the English dub of Tokyo Mew Mew.

Quiche's goal in the Tokyo Mew Mew is to reclaim his home planet, Earth, for his loved ones and himself, since they were starting to die off. Quiche is the first of the aliens to come to earth along with Pie, and Tart. His people were originally from Earth, and were forced to flee their planet. When he and the other aliens ended up on a planet with an inhospitable surface environment he was forced to live underground because of the sandstorms and high temperatures. He never forgot about Earth, and when he returns he's disgusted by the human inhabitants, as he feels that humans are destroying the planet.

Quiche uses chimera animas to accelerate the humans' environmental damage to destroy all life, and reclaim the planet. As a child he is seen as rather sad, but it appears he hides it with his cheerful personality so it didn't bother anyone close to him.

In Mew Mew Power however, his goals are changed to claiming the planet Earth since his planet, that he has always lived on, is extremely poor, which implies that he and the others are jealous.

More about Quiche in the Japanese anime

In his first full body appearance he was watching the movements of Ichigo in the search of the "ghost" at a junior high school. He speaks to Ichigo at the end of the episode saying that he was "rather fond of her". He then leaps down in front of and kisses her; unknowingly stealing her first kiss. He leaves her after saying "Thanks for the meal." (translated as "Thanks for the kiss." in the manga and fansubs) and the episode ended with her standing there stunned. From then on Quiche is seen using Chimera Animas throughout the series. Quiche very much enjoys his battles with the Mew Mews and treats it as a game. He has said before that all of the Mew Mews are rather "cute", but he finds Mew Ichigo the "cutest".

Quiche is a carefree, playful, clever, optimistic, and a rather open-minded person, although this is somewhat hidden by his blood-lustful intentions for humans. He enjoys torturing Ichigo Momomiya, his main enemy, whom he likes seeing in pain. He harasses her regularly and gives her nicknames like "honey", "kitty-cat", and "sweetie-pie".

He has a rather cruel sense of humor, playing with his opponents for his amusement. He is very sadistic and enjoys seeing humans in pain, both physically and mentally. He is seen as a bit fun-loving, such as when he tries to make sure that everything that goes his way amuses him. An example: considering his enemies his toys.

Quiche is also intelligent, seeing as how when he makes any mistake, he will find a way to make it benefit him. Quiche is very possessive over anything of his, and that includes people. He has a temper and he doesn't have much control when angered. He would even attack one of his comrades out of sheer annoyance at times. Even with his rather cruel personality traits, he does the things he does for his goal of helping his people, his friends, and his family.

Quiche hates humans for what they have done to the Earth, and would take immense pleasure in killing them. He is cruel and rather a figure of danger to strangers, but he can't help but be a happy, optimistic figure to the people he is close to. Quiche trusts very few people, seeing as how he hates all humans its only natural he only trusts (sometimes barely) his teammates Pie and Tart. He doesn't trust Deep Blue very much, despite Deep Blue's claims that his intentions are in their best interests. He sometimes wonders if Deep Blue is even trustworthy of saving their planet, and is more confident in his own orders because of this.

Throughout the series, Quiche is shown to developing increasing stronger feelings for Ichigo. He constantly harasses Ichigo and often gives her pet names, the most common being "Koneko-Chan". He would do anything to gain Ichigo's love. He has tried several times to kill her boyfriend, Masaya Aoyama, out of his jealousy and possessiveness. He first regarded her as an "interesting toy" that he'd kill for his leader. Slowly, but ever surely, as he got to see her more and more it became an obsession. Eventually, in the manga, he kidnaps Ichigo and confesses his love, then demands she cry because he loves seeing her frightened, although in the anime version, he is only seen attempting to kidnap her and later hurting her, only for Masaya to appear and transform into the Blue Knight in front of them both.

Towards the end of the manga, Quiche again declares his love to Ichigo, but when she rejects him he attacks her and begins strangling her. He starts crying and asks how he can make her love him before eventually releasing her.

After Deep Blue is awakened, Quiche turns against him to protect Ichigo and is killed. After Deep Blue's defeat, Quiche is revived with the power of the Mew Aqua. He returns with the others to their planet, and in the manga, wishes Ichigo happiness before stealing one last kiss before leaving with Pie and Tart.

Quiche can fly at will, teleport and do the same with people and objects, even opening dimensional portals. He is very strong, which is demonstrated in episode 18. He is able to distort the material, as shown in episode 13. He can breathe underwater and extract people's spirits. Quiche is very flexible and agile.

Quiche is seen using Chimera Animas for almost the entire first half of the series instead of actually using his skills.

In the manga it is shown in book 5 he can split himself into multiple copies.

Quiche uses bursts of energy to sometimes startle an opponent, or will use to destroy objects in his way (Or people).

In order to make Quiche's name easier for children to pronounce, most manga translations spell it as "Kish".

Despite Quiche's name being written in Katakana, indicating that his name is foreign, some dubbers have chosen to use the Japanese pronunciation of Quiche, "Kisshu", for his name. Other dubs use either the 4Kids English name or come up with their own names; For example, his Cantonese name, Hei-Si, means "cheese". 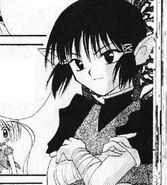 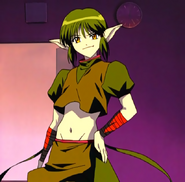 Retrieved from "https://tokyomewmewpower.fandom.com/wiki/Quiche?oldid=17269"
Community content is available under CC-BY-SA unless otherwise noted.