Sean Schemmel
Ryou Shirogane is a character who appears in both the anime and manga series. He is one of the main protagonists of Tokyo Mew Mew and is Keiichiro's partner for the Mew Project.

Ryou is a genius. In episode 36, his father mentions that his IQ was over 180 at age of 10. He is headstrong, stubborn, rude, sarcastic, and occasionally reclusive. He teases Ichigo Momomiya a lot, but he has saved her on many occasions when she has transformed into her cat form. Also, he encourages Retasu Midorikawa to be more confident. 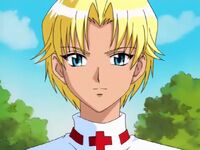 Ryou has tan skin and blond hair. He is tall and has aqua blue eyes, and is 15-years-old. When he's Alto, his eyes remain the same color. Ryou's Mew mark is on the side of his neck, which is always covered with the collars of his clothes.

When Ryou was 10, a Chimera Anima attacked his parents's mansion and killed them when he was out with Keiichiro. He tried to fight the Chimera Anima but Keiichiro held him back. He moved to America with Keiichiro and spent the rest of his childhood there, but then returned to Tokyo to perfect his father's work.

After her first day of school, Berry Shirayuki almost falls down a set of stairs, but was saved by Ryou, who caught her. He then invites her to the Café Mew Mew and she accepts, then goes there to admire the treats that were being displayed.

Later, Ryou catches Berry by surprise and she falls into a pastry display. She runs away, and goes through a DNA infusion machine, which merges her DNA with that of two endangered animals: The Amami Black Rabbit and the Andes Mountain Cat. She passes out and when she wakes up, Ryou gives her a robot named R2003, which she nicknames Ucha.

Ryou is dedicated to the Mew Project. When Dr. Shirogane's (Ryou's father) project was ready, Ryou was unsure that it would be safe, so he tested it on himself. He didn't have the right genes, so he didn't turn into a proper Mew Mew, but does have the ability to change into a cat for ten minutes. If he stays a cat for longer than that, he is permanently stuck in cat form.

When he is a gray cat, he goes by the name Alto. He wears a green scarf around his neck. Alto was introduced in episode 28. Alto saved Ichigo's life many times and has kissed her in order to return her back into human form. Ryou is the one who gave the girls their Mew Pendants so that they could transform. He was also the one who (with Keiichiro) chose which people would get the Red Data Animal DNA implanted in them.

Ryou keeps his name in all English manga translations. However, his first name is spelled slightly different in each one.

While most dubs either choose to use Ryou's Japanese name or 4Kids English name, some dubs have come up with their own, unique names for him.

Retrieved from "https://tokyomewmewpower.fandom.com/wiki/Ryou_Shirogane?oldid=17045"
Community content is available under CC-BY-SA unless otherwise noted.