Episode 13: Hearts That Miss In Passing, Aoyama-kun Is The Target

Jimmy Zoppi
Tart is a character who appears in both the manga and anime series. He is the one of the alien antagonists who come to Earth, wishing to "reclaim it."

Tart first appears in volume 3 of the manga and episode 13 of the anime. He arrives on Earth with Pie . Tart's race (known as Cyniclons in Mew Mew Power) originally lived on Earth, but it became uninhabitable so they moved to another planet. This planet was even worse, and all the aliens were forced to live underground for thousands of years due to sandstorms and other disasters. They finally came back to Earth, only to find that it had been taken over by humans. It is unknown how humans ended up on planet Earth.

Tart makes very small appearances in À la Mode, which does not advance the story plot. He appears in one small panel where Quiche sneezes, Tart tells Pie and Quiche that even though he shows his stomach as well, he doesn't get cold, with Pie replying "The idiot never catches a cold...", and Tart angrily replying "WHAT DID YOU CALL ME?!". In Japan, it is believed that if you sneeze, it means someone is talking about you, which is why Quiche sneezed as Mint was talking about him, and Tart didn't sneeze as no one was talking about him, but Tart assumes it's something else. This would be a joke most Americans would have trouble understanding, as it is an old wives tale of Japanese origin. An additional joke used in the alien's exchange would be the Japanese superstition that stupid people don't catch colds, hence Pie's words. Tart also appears in "Berry's Rush Report 2", asking what happened to him and his planet, and in "Berry's Rush Report 3".

Tart is kind of a crybaby and hates to be called chibi/chibiko (Japanese for runt, or midget) in Tokyo Mew Mew. He argues a lot with Ichigo and usually resorts to name calling. Overall, he is a rude and childish alien who likes to have fun, and make people cry. He is more prone to laughing out of true amusement (as opposed to Pie's solemn expression and Quiche's 'evil smirk'), and throws occasional tantrums when things don't go the way he expected them to. His energetic, childishly curious personality is comparable to that of Bu-Ling Huang.

In the manga, Bu-Ling Huang and Tart appear to like each other, later developing crushes on each other. At first, he kidnaps Bu-Ling, who doesn't seem to care that he's the villain. When he saves her from one of his dangerous Chimera Anima, she thinks they are friends, and nicknames him Tar-Tar (Taru-Taru). At the end of the manga, before Tart leaves, Bu-Ling kisses him and puts a candy drop in his mouth. Tart says he might come back to Earth for more, and to see Bu-Ling again.

In the anime, Bu-Ling is underground with Tart. At first, Bu-Ling is still cheerful as Tart tries ignoring her. Later, Tart realizes that Bu-Ling was running out of air to breathe and was going to die when Bu-Ling starts panting. He teleports them above ground, saving them both. Also near the 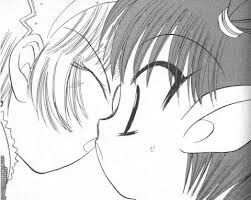 end of the anime Bu-Ling is about to fall from weakness and Tart catches her. He says what a fool he was and how he didn't like fighting anymore. Bu-Ling replies by saying that now that he's with her she is 100 times stronger, and puts her face down close to his. Tart also displays feelings of concern for her and mainly focuses his insults unto her and Ichigo (as Quiche loves Ichigo) his attitude is his way of trying to prove to himself that he can never have any feelings for a human like Quiche.

Tart has medium-length brown hair which he has in two pigtails. He's quite short but to be fair he is only around 10 years old. His skin is light and his outfit exposes a lot of his body. He has large pointed ears and bronze eyes. His shirt is red and he wears black shorts and bandages around his legs, but he doesn't wear any shoes.

In the manga and video games his hair is red to match his outfit like his relatives Quiche and Pie's hair.

Tart often wields a click-clack toy for a weapon, and has attacks named "Ho-Rai-Den" (封雷転, "Ho-Rai-Den") (Closing thunder revolving), and "Hissatsu Hourai-Kyuu" (Certain Kill Treasure Ball). Aside from his having control over plants and Chimera Animas also made from plants, he can perform flight, teleportation, and can even steal the spirit of a human (which he did once) like the other two aliens.

Most dubs either keep Tart's original name or use his 4Kids English name. There are a couple of exceptions. For example, the Danish dub accidentally got his and Pie's names switched.

Retrieved from "https://tokyomewmewpower.fandom.com/wiki/Tart?oldid=18292"
Community content is available under CC-BY-SA unless otherwise noted.